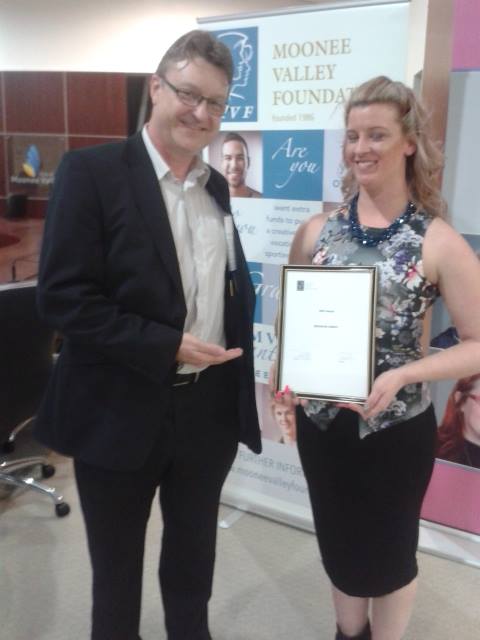 There doesn’t seem to be any shortage of visionary young people in Moonee Valley who are passionate about their sport, or scientific research or art.

We applaud the endeavours of the 2015 applicants who shared with us their plans for pursuing excellence in their own field and improving the lives of others along the way.

At our awards night in August we also heard from 2014 awardee Jessica Yu, whose creative writing skills have been widely recognised during the year, not least of all by the organisers of the Emerging Writers Festival, who invited her to speak at the event’s opening night. As well as being widely published during the year, Jessica also won the 2014 Young Writers Innovation Prize and was listed in the Melbourne Writers Festival’s 30 under 30 list of new talent to watch.

Another 2014 awardee who is enjoying success is musician Louisa Trewartha, who performed widely with her bank Crookshank during the year and then won a scholarship to study a master’s degree in Scoring for Film and Visual Media at Pulse College, Dublin.

The college announcement stated: “Louisa has exceptional talent for creating music for visual media that will continue to develop during the masters program, launching her career forward on to the global music stage.”

The following awards were presented to the successful 2015 applicants:

* Ezel Doruk, who attended Edinburgh Fringe Festival with the independent theatre group Attic Erratic to perform a lead role in the play Tripped.

* Meghan Sinnott, a rhythmic gymnast who plans to do an advance coaching course in gymnastics in order to be able to provide a higher level of coaching to young people in Melbourne’s west.

* Trent O’Dea, a member of the Australian volleyball squad, who hopes to maintain a senior position with the Volleyroos as they compete in the 2015 World League and Rio Olympics in 2016.

Good luck to all our awardees.